The album Las 7 salves de La Magdalena / 7 Songs of Praise for The Magdalene (2010) is a musical tribute to the historical/mythological character that has in the last decade been the axis of my literary and musical production. While I’ve been writing lyrics and melodies as a tribute to Her, my musical partners have been exponentialy adding light and life to that tribute, and my magdalenísima co-conspirator Tanya Torres has been giving her a body in paintings and mosaics. For years, we’ve been living this slow but steady process of creation. And now, finally, we’re ready to share the music and art that Magdalene has inspired within us.

The musical seed of these 7 songs of praise is the marian devotion of salves as practiced in the Dominican Republic, of aguinaldos in Puerto Rico and of the songs of the Feast of the Cross in both countries. The conceptual seed of this CD is a paralell marian devotion: the one I feel for the other Mary, The Magdalene.

* * * * * * *
It was in 2006 that Tanya and I decided to channel our shared devotion for Mary of Magdala into a joint artistic project in homage of the symbol and myth that She is. We had already started painting and writing songs for her. We had already started our obsessive dialogues and readings: interpretations and re-interpretations of Christian theology, the apocriphal and gnostic gospels, the myths, fiction, music and visual traditions of twenty centuries A.M. (After Magdalene). Everything good that we had and that we wanted to bring into our lives had to do with Magdalene. Wisdom was Magdalene. Heterodoxy was Magdalene. Ataraxia was Magdalene. From all the spaces that She occupies, we imagined her as guiding our process of celebration and discovery. Eventually, we started calling her Our Lady of Lexington, aknowledging her as the holy patroness that was shining a light on this bit of Lexington Avenue in El Barrio (East Harlem) where Tanya and I reside and create.

On the personal tip, Mary Magdalene became the central metaphor for my independent (a)theology, what I started calling my liberation mythology and Tanya started describing as her theosophy of the imagination. I had been raised Evangelical, then turned atheist as an adolescent and, as an agnostic adult, became immersed in popular Afro-Caribbean spirituality. But along all those paths I kept running into walls, turbulence, pain. Magdalene became my guiding myth in reconnecting directly with the Great Everything, especially with myself. Magdalene became the key to making peace with all the roads I had walked. She became the light shining on the path I’m walking now.

* * * * * * *
I developed a passion for Mary of Magdala just before the millenium came to a close. A young deaconess raised in El Barrio, Danielline Martínez, gave at San Romero de las Américas Church the sermon that turned upside down everything I knew until then about The Magdalene. The Bible is a historical and literary document, inspired by The Divine and filtered by our limited humanity, Danielline said that day. I was pleased to hear it inside a church. But, up to that point, I had heard nothing new. According to the canonical scriptures, Magdalene was not a prostitute, said Danielline. Say what?, I thought. The New Testament says Jesus cast seven demons out of her, that she gave of her resources to support Jesus’ ministry, that she was present at Mount Calvary, that she was the first person to see the risen Christ. But her name never actually appears alongside references to the anonymous biblical “sinner” (pressumed to be a prostitute) who washed Jesus’ feet with her tears and expensive ointments. The story of Magdalene being a prostitute became officialized thanks to a sermon in 591 by Pope Gregory the Great where he spoke of the anonymous sinner, Mary of Bethany (sister of Lazarus and Martha) and Mary Magdalene as the same person. Centuries later, the Vatican admitted the error in 1969: The Magdalene and the tearful sinner are not the same person. But despite the attempt to correct the widespread misconception, Mary of Magdala is still best known as a redeemed prostitute. (I have purposely chosen to use the term "prostitute" here rather than "sex worker" because the former term carries a historical weight and moral judgement that the latter does not.)

I have nothing against prostitutes or against redeemed prostitutes. But what irks me to no end is that folks insist on stamping Magdalene with a terribly ill fitting label. How convenient: the most important woman in the social, political, religious and philosophical movement led by Jesus got demoted by the “fathers of the Church” to repentant prostitute, to little more than a footnote. She who Orthodox Christians celebrate as apostle of the apostles. The wisest among Jesus’ followers, according to the apochriphal gospels. She who Jesus calls “fullness of fullnesses” and “completion of completions” in the gnostic text “Pistis Sophia”. The light of the Church, according to one of the medieval songs in “Legenda Sanctissimae Mariae Magdalenae.” The Mary whose importance was not dictated by maternity. Those images fired up my imagination.

* * * * * * *
Who is the most famous repentant prostitute of all time? The Magdalene, no doubt. In paintings by El Greco, Titian, Artemisia Gentileschi, El Españoleto, Gaspard Dughet, Georges de la Tour, Murillo, Paolo Veronese, and others, all titled “Penitent Magdalene,” she appears with her mythical alabaster jar, a book and/or a skull. It’s this last item that hypnotizes me: symbol of contemplation and wisdom, of rejection of frivolity. Here are a few examples: 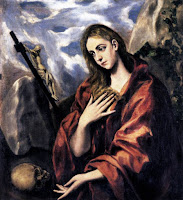 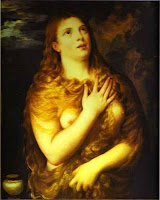 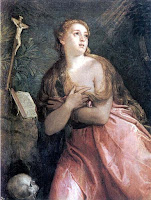 All those Spanish, Italian and French penitent Magdalenes painted with particular zeal in the 16th and 17th Centuries are gorgeous, intriguing, fascinating. Usually teary and blond, sometimes bony and other times plump, these Magdalenes are mystical celebrations of repentance and surrender that still always dwell on her alleged concupiscent past. The result? A viscously lascivious subtext. The underbelly of the moralizing sermon is swarming with lustful interests. The redeemed prostitute: the holiest, the sexiest, the tastiest.

So to this day, the myth of the prostituted Magdalene persists. People! Didn’t the Catholic Church admit decades ago that Pope Gregory made a lamentable mistake in interpreting the scriptures when he conflated The Magdalene and the anonymous repentant sinner? What happened? How many times does it need to be repeated? I am irritated to no end with this our collective obsession with the penitent Magdalene. Why the focus on the sins of she who was most faithful among Jesus’ followers? Why not focus on Judas who (one version of story says) betrayed Jesus with a kiss? Why not focus on Peter who denied him three times and, what’s worse, who was the rock upon which a message of liberation became re-built as an instrument of power.

* * * * * * *
Tanya’s painting titled Mary Magdalene of the Roses (included in my CD art) and all her other Magdalenes have helped me much in understanding and procesing my fascination and simultaneous horror over the stubborn myth of The Magdalene as sexy penitent prostitute. Tanya’s Magdalenes have been just the visual balm I needed. Tanya’s Magdalenes are not in penitence, but in contemplation, harmony, adoration. They do not blondify Her darkness. They are a colorful symbol of the myth that best helps me understand the everything and myself. 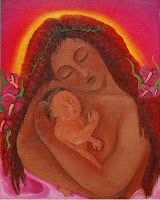 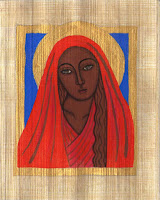 Magdalene: Apostle of the Apostles, Daughter of Humanity, Sophia Embodied, Fullness of Fullnesses, Completion of Completions, She Who Knows, Lamb, Redemptress, Ancestress, Amalia Belcán. All and none. One. Right hand of light. Left hand of darkness. The truth and the way that lives within each of us. My Magdalene. Our Lady of Lexington. ¡Salve Reina!